It's the end of May and no new recipes! Well, it's because I was busy using old recipes: golden egg bread, two batches of bagels, almond jello and one batch of cinnamon raisin buns in muffin format. I've updated some of the old recipes with new pictures. The rest of the time it was too hot to cook, so I gladly enjoyed the beginning of mango season.

I'm always surprised by the number of people who say they don't know how to cut a mango. There are several methods depending which type you have. 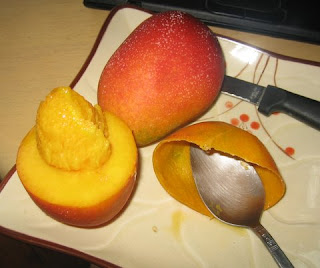 Right now the Ai Wen mangoes are pretty good. I recommend cutting them in half as shown. You can then spoon out from one half. Eat the half of the seed that's showing. Then twist the seed around to take it out and suck off the other half. Finally, spoon out the second cup. Delicious!

For the massive mangoes with super thin seeds, I would slice oblong as close to the seed as possible. You can then spoon out the meat to eat, or continue to slice, by making a grid. You can then flip it out, making it look like an armadillo, and eat without a utensil. Cut on the other side of the seed and repeat.

Mango season only lasts so long in Taipei. So at the end of the season, make sure you dice them up and freeze them for year long enjoyment! You can defrost them and eat them immediately or toss them into a blender frozen for smoothies.
Posted by Lin at 5/31/2009 11:25:00 AM No comments: