Someone in the neighborhood was selling homemade galette des rois, which I'd never heard of. They looked so beautiful I wanted to try it myself. Plus there was the fun aspect of finding out who would be king for a day. I misread the instructions and missed 1/3 of the nuts in the mixture and the filling oozed out of the crust and came out boiling in butter. However, despite the ugly appearance it tasted delicious and I would make it again with adjustments (following the right ratio as well as changing the baking temperature). It was very fun to see who would be king of the day - it came down to the 11th slice out of 11 to find out! XBD and DBD each made a crown for the winner, who proudly wore it on the 3rd and 4th days.
I used 2 different recipes - 1 for the puff pastry and 1 for the filling. They each had different baking temperatures - next time I would follow the higher temperature as advised by the pastry recipe. The higher temperature is supposed to help the butter steam and make it puff up. The lower temperature just melts the butter slowly and doesn't puff up. 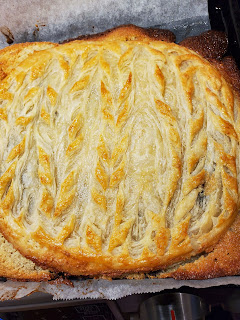 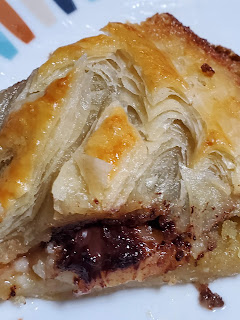 I've bought a kit the past few times we've put together gingerbread houses but with so much extra time at home I figured I'd try making them from scratch. This is a multi-day project. Day 1 make the dough. Day 2 bake the shapes. Day 3+ build and decorate. This was enough to make 4 small houses and 3 cookie people.
Day 2
Day 3 (or 4, 5, 6) 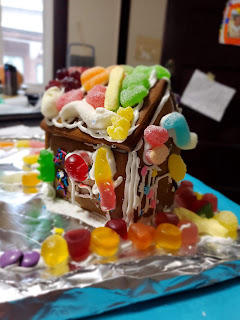 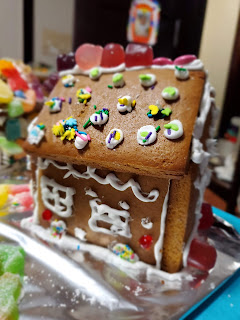 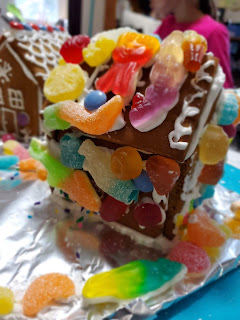 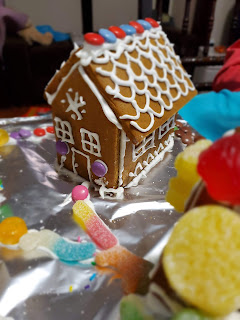 I had a giant lemon and used the juice from all of it - and so this came out super lemony. I think it would have been nice with just a tablespoon of lemon juice instead of what probably amounted to 1/3 of a cup or so.

This was a fun new shape to experiment with. However it results in a GIANT bread - which due to a pandemic lockdown, I had no one outside our household to share it with. I would not recommend making it for a single family. I also wanted to make a plain or savory bread, having baked many sweets the previous days. However, I had a small amount of cinnamon-sugar mixture leftover from the swirl cookies, so sprinkled this on the very outer edge. This ended up being my favorite part - which maybe speaks more to my sweet tooth than actually being a better option.

This was fun to make once but I would probably not make again. Cinnamon Star Bread is still a favorite, and there are some other fun shapes I'd like to try first. 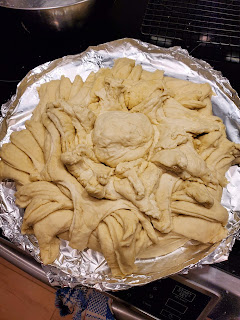 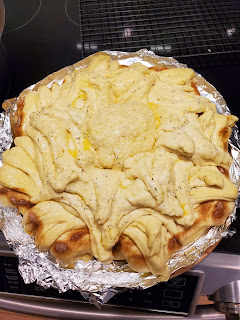 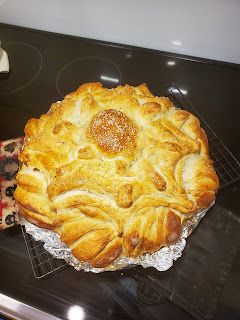 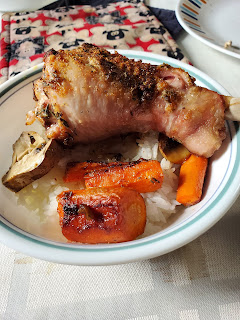 I scored a good price post-thanksgiving on turkey drumsticks, so bought a few to make this lunch. Delicious and easy with a meat thermometer.
Posted by Lin at 10/17/2020 02:24:00 PM No comments:

I made a big tray for a bbq at the park. It disappeared quickly.

Nothing better to eat on a hot day than a chilled, colorful fruit salad. Use a variety of fruits - in both colors and textures. Do not use watermelon (too watery). I would also avoid cantaloupe and honeydew, just because they're not as exciting.