First time I had brussel sprouts was at G's house - fresh from her garden. Delicious! I had no idea why there were the dreaded vegetable of commercials. They're everywhere at the markets now so I finally bought some. Not as good as garden grown, but still tasty.

made this for dinner tonight. It's just like lasagna but with a different pasta shape. Used brown rice macaroni to make it gluten free. Make sure all pasta is covered with sauce or cheese...since the pasta dries up and hardens very easily. 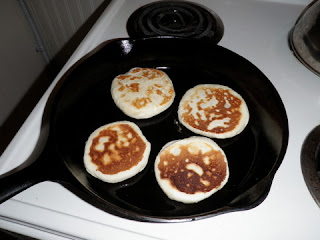 Hotteok are a delicious Korean snack - akin to a grilled pancake with a cinnamon-sugar filling. I first experienced it in Korea this past April with C. She showed me her favorite stands and I filled up on as many as I could. On a cold foggy day at the bottom of a mountain, they are the perfect snack to get you motivated. When you bite into them, the cinnamon-sugar juice is waiting to burst out into your mouth. The grilled dough wrapper is a thin vehicle to get the delicious filling inside. The dough is prepared ahead of time but the rest is done in front of you - the rolling, filling and cooking. They are a 5 star snack. This is my first attempt at making them at home. I don't have the equipment that the street-side cooks did, so I made do with what I had. They taste pretty good (4 stars) but in comparison to the authentic Korean ones, this can only garner 3 stars. Now that I'm in a cold climate again, I hope to experiment with a few other recipes before settling on the perfect one.

Hotteok Try #1
I rolled the first two by hand but they were too thick. So I used a rolling pin on the remaining six. These came out pleasantly thinner, but still not as thin as the authentic ones. It was hard to get any thinner without the dough breaking and revealing the filling. So I went to just before the breaking point. Recipe from this entry. It calls for milk but I only had lactarded milk on hand. Not sure what difference this makes but my dough did not come out sticky as the blog mentions. 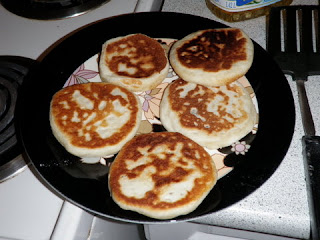 Filling
I had trouble fitting in this much filling. Could get away with half - but I also felt there wasn't enough filling inside - so next time make sure to really stuff them.
Other Recipes to Try
Korean recipe - uses egg in the dough
another Korean recipe - different ratio of flours (less glutinous rice flour)
Variations
- instead of peanuts, use walnuts or black sesame or almonds
- if you've run out of glutinous rice flour, use regular flour
Posted by Lin at 11/07/2010 08:53:00 PM No comments: